Shopping Cart
Your Cart is Empty
Quantity:
Subtotal
Taxes
Shipping
Total
There was an error with PayPalClick here to try again

Thank you for your business!You should be receiving an order confirmation from Paypal shortly.Exit Shopping Cart

Claustrophobia and Other Fears. 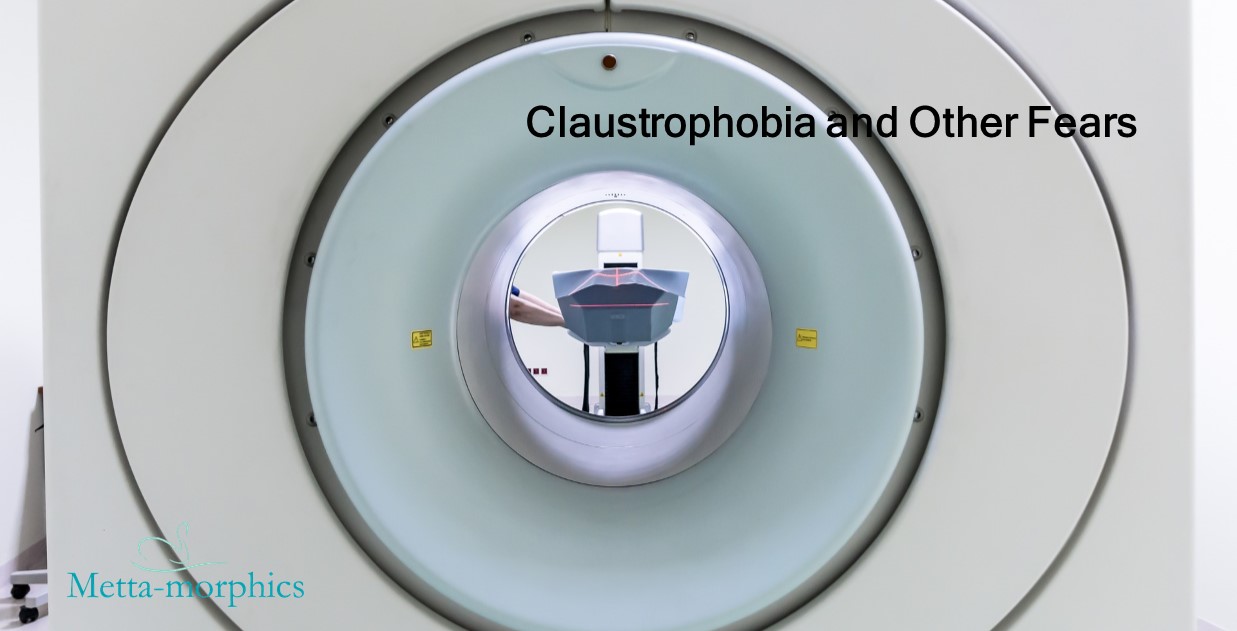 Recently, I have been working with the service users in the Irish Wheelchair Association Navan branch, teaching Mindfulness, funded by the LMETB Community Education Service. The subject of dealing with upcoming stressful events was a topic of discussion as most of the class has fears about hospital appointments such as blood tests, MRIs and other tests. I had to have an MRI myself last month so, I had a good understanding of what they were talking about. I too had to prepare myself as like many people I am somewhat claustrophobic.

My claustrophobia all started when as I child I would hide under beds and in cupboards when I became overwhelmed by the noise and hustle and bustle of a house with 7 people, and one cat, living in it. On one occasion I got locked in a cupboard that had no lock on the inside, only to be found by my sister who happened to open the door, and on two other occasions I got stuck under a bed and caused myself to have panic attack. At the time, it always seemed like I had been missing for hours but I was regularly amazed, when I returned to the land of the living, that no one had even noticed I was gone. I am sure now, it was probably only 20 minutes but to me, then, it seemed like hours. Unfortunately, these experiences caused me to dread feeling helpless as, at the time, my cries for help fell on deaf ears (or so it appeared to me) and they also triggered feelings of claustrophobia.

As I got older I challenged myself to face my fears. I am fine in lifts, I have been in mines, caves, scary dark theme-park rides and have crawled under cars and into small spaces attempting to repair things or rescue animals, as the case may be. It took me by great surprise when one day during a meditation I had a flash back akin to being buried but which was actually me being trapped under a bed. In hindsight I realise now this was a by-product of some work I had been doing on myself in relation to asking for help and I guess my clever, old unconscious mind thought it would be good to create a scenario where the only solution I could think of was to be saved by someone else digging me up – ‘Oh insert expletive here’. (I have since come up with several other imaginative ways of getting out of being buried alive, by the way).

I had mostly forgotten about it but when the MRI appointment came around I started to get more and more panicked about being in the machine and feeling trapped. It came to a head when one night in bed, I started to panic, and I knew if I didn’t do something I would end up having a panic attack. First, I noticed my breath and made an effort to slow my breathing down. I looked around the room to ground myself in my surroundings, the cream paint on the walls, the blue carpet, the feeling of the duvet against my skin. As I started to relax, I lay flat again, I had sat up as I was afraid to lie down with the heavy feeling pressing against my chest. I turned to face my husband and I focused on his face as I allowed the moment to pass and my body and brain return to safety. Once I had calmed down it wasn’t long before I was able to return to sleep again, all the while reassuring myself that I was safe, and this was all in my mind.

The next day I set about fixing this so that I could have my MRI without fear or panic. I used self-hypnosis to put myself into a relaxed state and I ran through in my mind what the day of the MRI would be like. I saw each part, breakfast, the journey to the clinic, filling in the form, the canula in my arm, the tunnel and of course heard the sound that so many people dread. At every opportunity I mentally rehearsed feeling safe and calm, each time my mind wandered to fear I focused on the present and came back to now. I reminded myself it was ok to feel helpless but, on this occasion, I wouldn’t be. I’d have an alarm in my hand, the radiographer would be there, and my lovely husband, James, would be waiting outside. I practiced every day right up to the day of the MRI. When the day came, I was calm. When I lay down and went into the machine, I noticed my surroundings, the grey stripe on the ceiling of the machine, the coolness of the air, the weight of the cage across my body. Rather than trying to block out the sound, like most people do, I listened. I noticed the change in beeps and knocks. I counted them in-between the instructions to breath. I noticed my breath, my thoughts, and before I knew it, it was over, what was supposed to take forty minutes only took twenty.

As I told this story to the service users in the IWA one of them started to laugh as she realised that what she usually did, on occasions like this, was she planned to ‘freak out’. As we all laughed, the others understood, as they all knew they were in the habit of doing the same. Rather than thinking of how they wanted it to be, they were focusing on how bad it could be, how scared they might be, and what could possibly go wrong. They also realised they often felt ok during any tests but had never thought to prepare to be ok before and after, and especially whilst they waited.

In the moment it can be difficult to deal with a flood of emotions, Mindfulness and flooding techniques help but planning to cope is much better. The next time you are faced with a challenging upcoming event, then plan to cope, mentally rehearse it so that you know you can and will be safe.

Thanks for reading. Feel free to comment or ask questions and if you want to get in touch email [email protected],com or phone 00353868373582.

I hope our paths cross again in the future,

Oops, you forgot something.

The words you entered did not match the given text. Please try again.